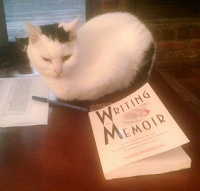 This post isn’t about Cleveland being lit, although an argument could be made that it is. Instead it’s about Literary Cleveland, a nonprofit organization that caters to writers and readers.

Lit Cleveland begins the new year with a new executive director and a slate of fantastic programs and workshops. Christine Howey has succeeded co-founder Lee Chilcote at the helm.

In the next few months, there will be workshops on writing fiction, poetry and memoir, among others. Some workshops have filled up already, so don’t hesitate if you’re interested in any of them.

For many writers, the hardest part is getting started. January’s four-week “Developing a Writing Habit” class with Darlene Montonaro is full, but she will teach it again in February.

Maybe you’ve written something and you’re trying to get it out there. “Shameless Self-Promotion for Writers” with Ken Schneck on Jan. 23 might help you. Huda Al-Marashi and Laura Maylene Walter will present “Real Talk: Finding a Literary Agent” on April 4.

Some workshops have a fee and others are free. Members get discounts on all workshops, and the membership fee is tax-deductible.

Literary Cleveland’s headquarters are in 78th Street Studios in Cleveland’s Gordon Square neighborhood, but classes and workshops are offered on both sides of town and occasionally in points south.

You know what they say about all work and no play. So a few times a year, Lit Cleveland has member mixers that are fundraising social occasions. They are nice for writers, who work alone much of the time.

For those who want to read but not necessarily write, check out the Resources tab on the organization's website for information about local book clubs and readings. Literary Cleveland also publishes Gordon Square Review, a free online literary magazine that spotlights Northeast Ohio writers.
at 4:00:00 AM